Are you ready for it?

*Sorry not sorry for all the pictures in this one!* 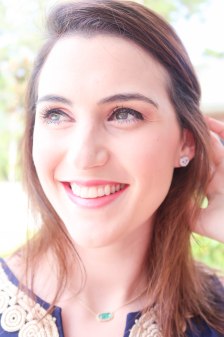 To say I have been counting down the days until finally seeing Taylor Swift on her Reputation Stadium Tour is an understatement.  Especially since I bought the tickets last December, it has been quite the waiting game.  I have been trying to avoid watching Instagram stories and posts from people who have attended the concert previously, and I was somewhat successful.  I wanted to go to the concert not knowing what to expect and be able to fully enjoy the experience for the first time!

Overall: 11/10 – if you have never seen Taylor Swift in concert it should be put on your bucket list immediately!  The girl knows how to put on a great show!

I was super excited when her opening acts were announced.  I shamelessly sing Havana by Camilla Cabello whenever it comes on!  She’s a newer artist, but I really enjoy the music shes put out, and she’s a great dancer, so I knew she would be entertaining! Truth be told, I had no idea who Charlie XCX was before she was announced.  Come to find out shes actually featured on a lot of mainstream hits.  For example, she sings in Fancy with Iggy Azalea!  There’s your fun fact for today!  Both of these girls were great opening acts!  They were super entertaining, and they set the stage perfectly for Taylor.  I really enjoyed them and appreciated that they set out to put on their own individual shows rather than just singing a few songs before the main act. 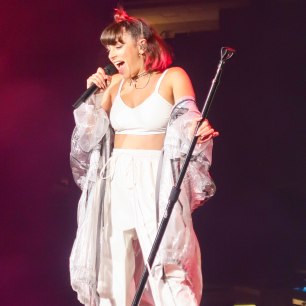 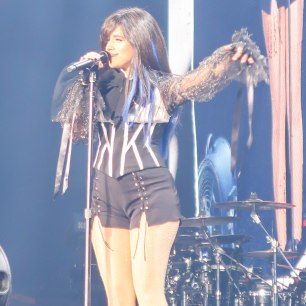 They were great, but I was anxiously impatient for Taylor to come on!  Let’s just say girl knows how to make an entrance.  I fully supported all of the glitter bodysuits she wore throughout the night.  They were the perfect combination of girly but dark to match the overall theme of the album.  She told the crowd that she had broken the record for the highest female attendance in the Mercedes Benz Superdome in New Orleans!  OK TAYLOR GO HEAD GIRL!  My dad joked that it was impressive because the New Orleans Saints can’t even sell out their own dome, but she can. 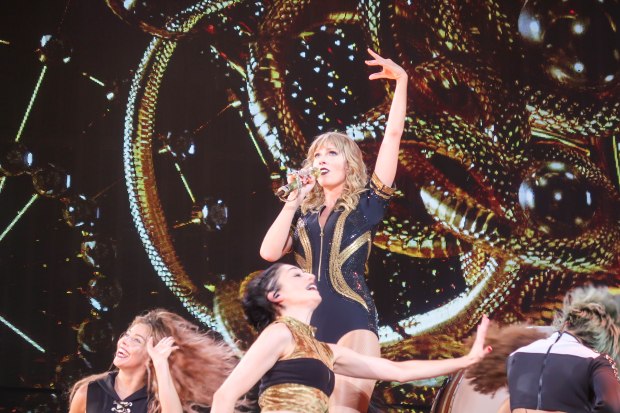 I have to say I am not a fan of snakes or creepy critters in general, but she knows how to brand her reputation and do it so flawlessly.  I was obsessed with the subtle and not so subtle touches of snakes she incorporated in her performance.  Everything was so well thought out and had a purpose for being there.  She shared with the audience that typically when writing an album she would create all of the songs and choose a title that represented an overall theme.  For reputation, it was different, she knew her title before writing all of the songs, and she knew what each song was going to revolve around.  As a dedicated Swiftie, I know how her name has been drug through the mud for every little thing, but she never failed to say true to herself or her fans, which is what I honestly love about her the most.  She is a celebrity, but I feel like we could be best friends.  She’s quirky, real, and honest which are hard qualities to find in people nowadays. 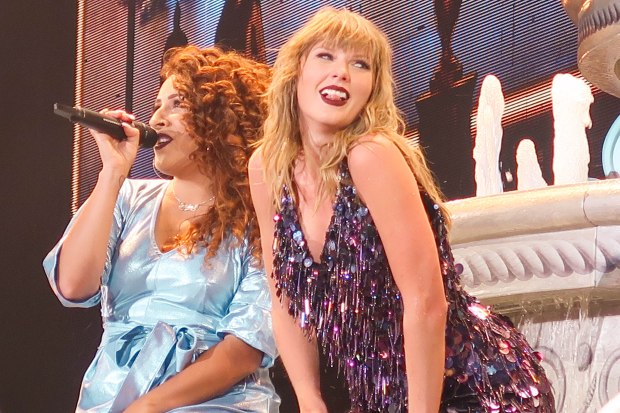 My two favorite performances of the night were End Game because 1. that is my favorite song from the album and 2. Ed Sheeran (enough said).  Her surprise song for our stop was Speak Now which is an all-time favorite of mine.  Before she sang it, she let fans know that she had never actually interrupted a wedding before, but this is what she had imagined it would be like.  But probably her best song of the night was Shake it Off!  I honestly don’t think anyone in the dome was sitting down for that one.  It is such an anthem of fun and letting loose that even some of the security staff couldn’t help but dance along.  Also, she wore this amazingly pink ombre sparkle dress that was UHMAZING for it! 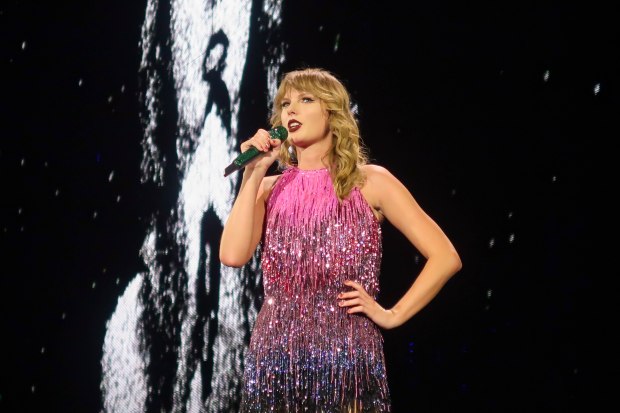 Honestly, last night will probably go down as one of my favorite nights ever!  Also, a final shout out to my mama, my best friend, who has been to every Taylor Swift concert with me and fully supports my obsession.  I honestly could not think of anyone else I would have wanted to spend last night with! 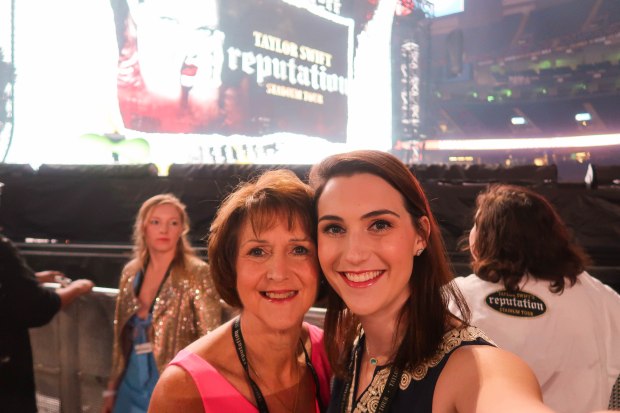 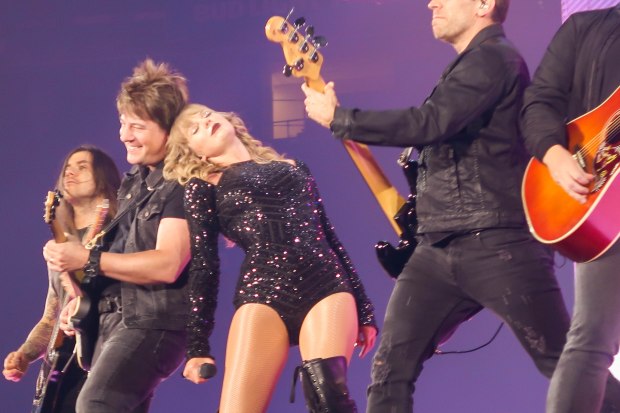 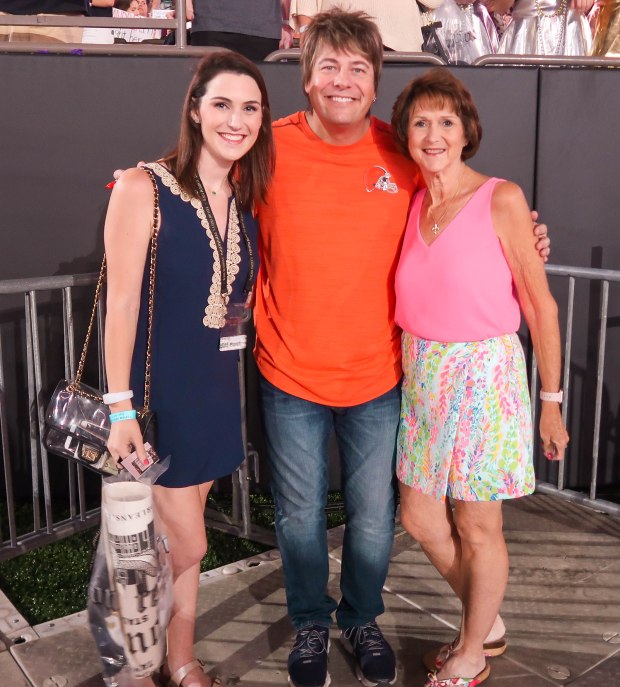 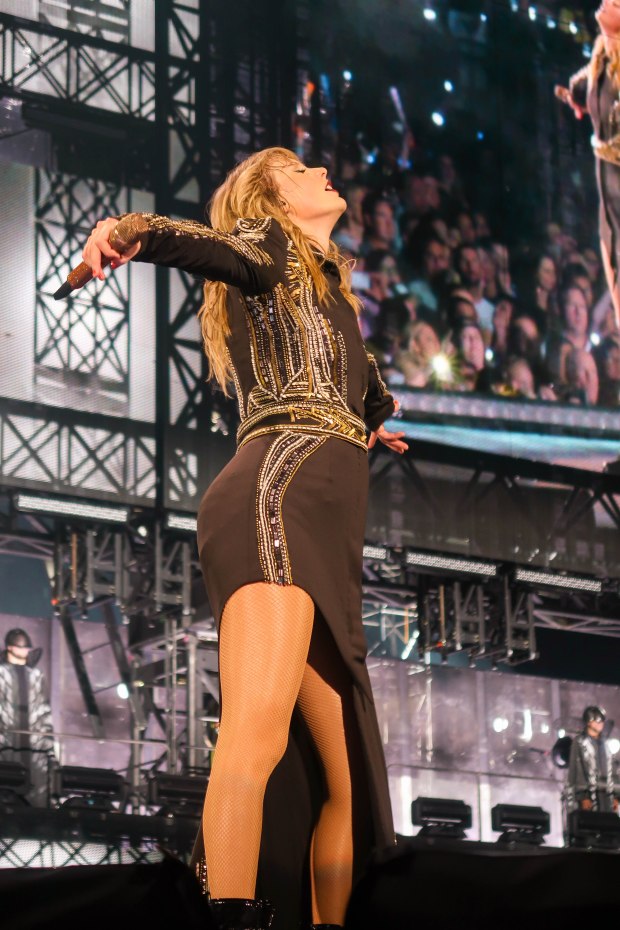 I’m Ashley!  Positively Pink was created in August of 2018 as a place for me to share my love of Disney, Lilly Pulitzer, and all things pink!  I am from a small town right outside of New Orleans, LA.  I am currently a senior studying Marketing with a minor in Public Relations.  I completed the Disney College Program in the Fall of 2016.  I love taking photos and coming up with creative content for Positively Pink and my Instagram, alramirez__. 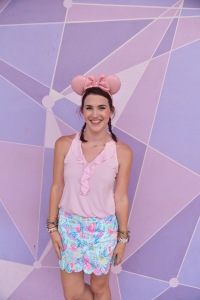