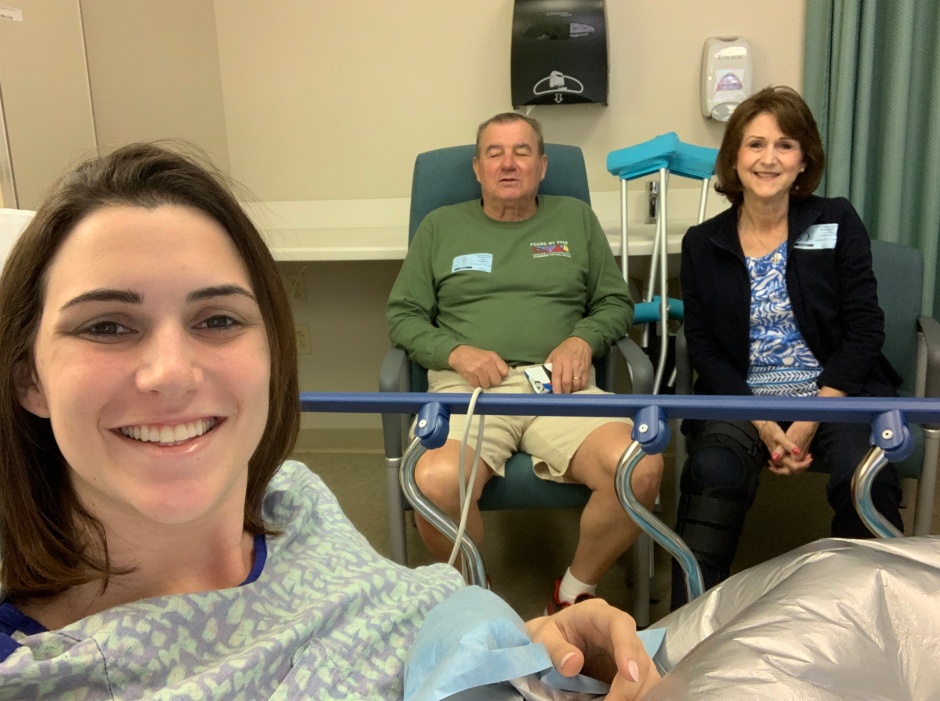 As most of you probably know by now, I underwent major surgery on Tuesday morning to fix my left hip.  I did not share anything about the surgery on social media beforehand because I was not emotionally prepared to deal with it, and I needed to process it on my own terms before sharing it with others.  I’ve known I was having the surgery since December, but I wanted to enjoy my last few months of freedom without filling them with the anxiety of the future but rather enjoying the present.  A little background on my orthopedic history to start off the tale.

A long time ago in a galaxy far, far away.  Okay, it wasn’t that long ago, but it seems like a lifetime ago.  I was a competitive swimmer – I began summer swimming when I was four, and I finally moved up to year-round swimming when I was in 6th grade.  My best stroke were breaststroke and butterfly, which require a lot of effort from your knees.  I started having knee pain towards the end of 7th grade.  I did what felt like a million x-rays for the doctors to tell me it was growing pains, and it would end once I stopped growing.  Inaccurate.  The pain worsened, but I pushed through.  Finally, towards the end of my freshmen year of high school, I was referred to get an MRI.  The MRI showed a bone tumor growing in my knee.  Once the radiologist looked back at the previous x-rays, it showed the tumor had been growing at a constant rate for the past three years which was causing the pain.  Right after my 15th birthday, I underwent my first major surgery to remove the tumor.  After a few more follow up visits and consultations with specialists, my family and I thought we put the worst behind us and moved forward with our lives.

Now fast forward 3 years later, I had just graduated high school and I was preparing to head off for college.  I started experiencing pain in my right ankle out of nowhere.  The pain couldn’t be explained because I had no obvious injuries, and the x-rays and MRIs weren’t showing anything.  To avoid surgery, my doctors put me into physical therapy and a walking boot until they could decide what would be the best next step to take.  After 8 months in the boot, my doctors decided that I would undergo exploratory surgery on my right ankle when I came home for winter break.  The surgery was successful as I had a torn tendon in my ankle that needed to be fixed up.  My doctor concluded that the tear happened on its own.  Shout out to my body for literally ripping itself apart.  The next August, I had the same exact surgery and the same tear on my left ankle.  Again, another freak accident.  The next May, I underwent surgery to fix a tear in my right labrum hip.  Again, I had no fall or accident on my hip, but it was a pain I had been dealing with since I was swimming in high school.  At the time of my surgery, the procedure was fairly new and innovative.  Thankfully, I had one of the best surgeons to perform it.  It was an extensive and painful recovery, but I came out pain-free.  I went for a year and a half without having any procedures.  It was like a breath of fresh air.  I finally felt like I was out of the woods.  I wasn’t of course.  Spring Break 2018 I noticed a pain on the balls of my feet.  From Google and both my mother and grandmother’s personal experiences, we self-diagnosed my pain as Morton’s Neuroma.  This procedure, unlike my others, was not that shocking or major.  The tumor growths on the balls of my feet were hereditary, and I was 99.9% chance likely to develop them just at a later stage in life.

So if you’ve lost count, I was at a total of 5 orthopedic surgeries since December 2014.

Fast forward to November 2018, my training for Wine and Dine Two Course Challenge was slightly derailed due to an aggravated calf muscle after my double foot surgery.  The longest run I was able to get in before my first half was only 8 miles.  I was anxious, but I knew I could push through and finish the challenge.  Thankfully, the race went great, and I was living a runner’s high.  It wasn’t until a few hours later that high came crashing down.  When we returned to Epcot for the post-race party, I had the worse sharp pain in my left hip.  I honestly didn’t think much of it – just some post-race soreness which would be completely normal after running 19 miles.  I went home and continued my training as normal.  Heck, the next weekend I ran my fastest 10k shaving off almost 10 minutes.  It wasn’t until about a month later when the pain stuck.  I was running the Tiger 10k in Baton Rouge.  Truthfully, I barely made it through that race.  The pain was excruciating and the hills on campus didn’t help my case either.  After that race, I knew I needed to be seen.  I called my physical therapist who treated my hip the last time to get his opinion.  He said it could be a groin strain or my labrum acting up.  Because of my orthopedic history, he wanted me to get an MRI done which my hip surgeon signed off on immediately.  Low and behold, the MRI confirmed my greatest fear – another labrum tear but this time in my left hip.  My doctor told me I could keep running as long as I could deal with the pain.  I’m pretty sure I squeezed every mile out of my bad hip that I could. Considering I ran a half marathon the day before my surgery I would say I did a pretty good job at it. 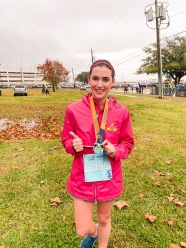 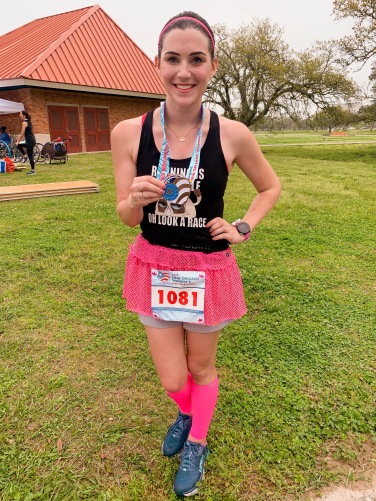 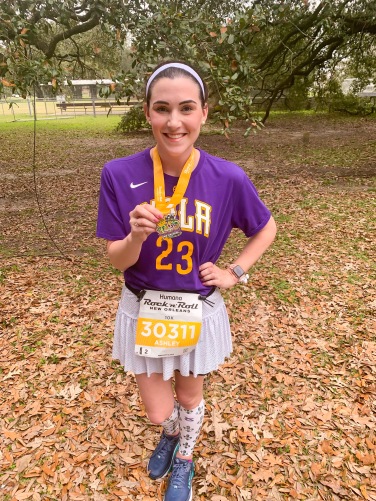 92 magical and miserable race miles were completed since the hip pain started and before I went under for surgery.

Today is 5 days post op, and I am feeling pretty good.  I have been off the pain pills for 3 days now, so I have been spending most of my days in my dad’s recliner watching Netflix and napping.  It took a few days, but I finally am beginning to get a good night’s sleep.  It’s not the pain that keeps me up, but it is finding a comfortable position with the two contraptions I have to wear while sleeping.  I began physical therapy last week, the day after surgery, and I will continue with appointments for a couple of months.  My physical therapist said it will be about 3 months before I can start jogging again.  He gave me the all clear that I should be good to go for Wine and Dine Two Course Challenge again, so I am using that as a motivator for the next few months while I’m recovering.  Honestly, the biggest takeaway from this whole ordeal is to be thankful for the body you have and all that you can accomplish with it.  Thank you to all of y’all for the kind messages and thoughts these past few days.  Just knowing I have the support of friends and family behind me means more than you know.  I look forward to getting back moving and grooving but until then I am going to take things slow and focus on both my mental and physical health.

Honestly, I am counting down the days until I can run again.  I never realized running would have such an impact on my life, but it truly has changed the way I see myself and appreciate all that I can do.  Never did I think I would look as happy as I did while choosing to run 13 miles.  I am ready to face this injury and recover so I can come back stronger than I was before.

I’m Ashley Ramirez – the girl behind Positively Pink.  I started Positively Pink in Fall of 2018 as a way to share my passion for all things Style, Disney, Running, and Pink!  I live outside of New Orleans, LA and almost always have a Starbucks in my hand!